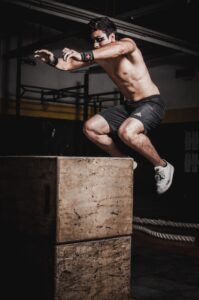 Do you know you are powerful beyond measure? Yes, indeed you are Powerful. The human mind has vast reservoir of strength, power and creativity which many discovered during adversities and time of necessities.

The human mind like an isotope of uranium is capable of wonders. The uranium has large amount of energy stored in its atom which can power cities as well as produce series of chain reactions that can destroy cities. The power of the human mind if used for the benefits of humanity can uplift the world.

Evidence of these are abound of people achieving great feats in science and technology, sports, medicine and in individual lives.

However, the greatest enemy that bind and bound our minds from unleashing its wonders is fear.

Fear which is an acronym of false evidence appearing real is a killer of dreams. It can stop you from reaching your full potential and attaining greatness.

Fear creates illusion in your vision and mind making the obstacles ahead of you seem bigger than you can handle.

The Lily livered who are ignorant of the power they possesses would retreat into their shell for fear of the unknown.

This has killed many dreams and wasted the lives of many potentially great men and turned them to ordinary men.

One early harmattan morning, I woke up earlier in other to catch a 6:30 am  bus out of town. As I got to the street everywhere was covered in a thickset of harmattan dew. I couldn’t see the road ahead of me.

Fear wanted to grip me, but I instantly pushed it away from my thought, because I knew it’s dangerous to allow it take root in my mind. As I continued my walk through the mist, I realized that although I couldn’t see far ahead of me everywhere around me was clearer with each step I took.

This is an example of false evidence appearing real. The dew gave an impression of uncertainty and danger. Fear wanted to amplify it, but because I didn’t let it take root in my mind, I began to see clearly as though there were no Misty cloudiness.

Related: How to make your dream becomes reality

I discovered each step was just as clear as the last. It was all an illusion because there was nothing they.

This’s how it is when trying to do something big like starting a business, going on an expendition, running for a political office and learning a new skill. Fear would come in and weave several illusion in your mind to stop you in your stride.

But if you know you are Powerful beyond measure you will rise each time to the challenge.

This is where the repetition of powerful affirmations comes in. Since the purpose of fear is to put you in a state of limitation and cause a distortion in your mind, you can use affirmations such as this: “I can do all things through Christ” to insulate yourself from fear and take charge of your mind.

The story was told of a weightlifter who could not lift a particular weight category. But when his trainer tricked him into believing he was to lift a lesser weight, he lifted it with ease. This shows the stupendous power in the human mind.

If you think everything is an obstacle, they probably would be. Because that’s what you have in your mind

If you don’t challenge yourself everyday to give your best effort to life, you will live a mediocre life, someone who is always at the mercy of the vagaries of life.

At every stage in life you need to always be watchful for dream killers. Sometimes, they are your own thoughts. That’s why you need to challenge yourself everyday whether you are already successful or climbing out from a hole.

Perhaps it’s appropriate here to share the stories of three individuals who found themselves at the lowest ebb of life and dug themselves out from the dark place into light.

Tiffany Haddish is an American Commedien and Actress who had a turbulent upbringing. At the young age of 9, she started experiencing the tumultuous nature of life.

Her mother got involved in a car accident when the break of her car failed. This left her brain damaged and hospitalized for months, leaving Tiffany to start playing the role of a mother to her siblings at a tender age. This got worst when her mother was later diagnosed with schizophrenia.

This began Tiffany sojourn through different foster homes and separated from her four younger siblings.

At school she had a tough time because she couldn’t read, but she eluded her teachers each time by causing trouble and disturbances when she suspects she would be ask to read.

Related: The only way out is through… Surrender

She was always ahead of herself each time figuring out what to do to survive. However, a teacher figured she couldn’t read and provided help which helped her overcome the difficulty.

Once Tiffany became 18 years old, she had to leave the foster home to go make way for herself and earn money in other to be able to take proper care of her mother. But she came faced to faced with herself, got raped, became homeless and sleeping in a car, and suffered many disappointments.

She epitomizes the can do spirit as she kept challenging herself to reach new heights. Today because she refused to quit, she has gone to the Pinnacle and living the life she dreamt of.

You can do anything you set your mind, you only need the awareness that you are Powerful beyond measure.

The second story is about another individual who braced the odds of life circumstances and turned his life around.

Frank Shamrock was an undefeated MMA champion. Born into poverty, he grew up in an abusive home, and always locked up in a closet.

He took to crime, and became an alcoholic as a means of excape. He spent time in a juvenile home and became a prison in mate before he turned 18.

However, help soon came his way when he was adopted by Bob Shamrock. Shamrock ran a non-profit for at risk boys. It was Bob who first showed him love and encouraged him to take to mixed martial arts.

Frank conquered his demons and channelled his energy into sport. Spent many hours in training under different coaches, learned discipline understand his foster father and ended up becoming world champion.

Anthony Ervin is a former American swimmer who won a gold medal at the Sydney Olympic in 2000. When he came back from Sydney he retired from swimming at age 22 and went off pursuing other fantasies and to discover himself. He joined different rock bands, became a Buddhist and subsequently took to crime, smoking and always involve in one problem or the other with the authorities.

He even attempted suicide when he took the whole content of a prescription medicine he was taking for his Tourette Syndrome. After getting tired and becoming stuck in a downward spiral, he came back to the States and took the decision to complete his master’s degree at the University of California.

After completing his master’s degree, he packed his bag and decided to be a coach. He got a job coaching teens and young adults at a swim school in New York own by a friend and former team mate.

After coaching for a while he couldn’t resist the allure of the pool. He started swimming again, and went on to compete in two more Olympics winning a gold at Rio Olympic in 2016.

For Ervin to get back to competitive levels, he spent many hours in the pool always challenging his aging body. He became the oldest man to win a swimming gold medal. He accomplished this feats in 50M freestyle 16 years after he first won a gold medal at Sydney.

I told this stories as a reminder that you are Powerful. No matter where you are in life, whether you are trying to find the elusive success. You can turn your life around. You can change your story and you can be great again.

3 Ways to Fix Yourself

The people I told their stories above succeeded in fixing their lives. If they can do it I believe you can fix yourself too.

The steps below can help you fix yourself.

She stood her ground and Hollywood and comedy accepted her.

Also when Frank Shamrock found out he wanted to fight. He sought out the best trainers and practiced for many years. Even today, he still practice to hone his skills as a UFC commentator and promoter.