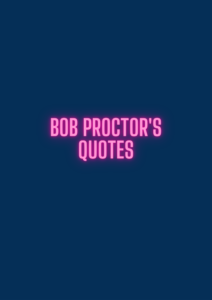 Bob Proctor Quotes– Bob Proctor is best know for his exploits in the documentary (film) ‘The Secret’. He’s a self-help author, personal development coach and a big proponent of the law of attraction. He has vast knowledge and experience to help people tap into their full potentials by exploring their creative ability and imagination to create the life they want.

These Bob Proctor’s quotes come readily handy when I am in need of a boost of confidence and energy to keep going each time my morale is at its lowest ebb.
I hope you would find these quotes helpful in your quest for love, power and success as well.

Read Also: 10 Things to Love about Yourself