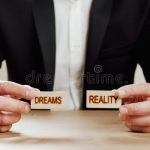 In approaching the subject matter how to make your dream becomes reality, I was at a loss on the type of dream the title is referring to. This is because I have often heard religionists talked about how they dreamt and after few days or months their dream manifested in their lives.

Since I’m not a pastor or some form of religious teacher I guess I will restrict my article to how people through dints of hardwork manage to make their dream becomes reality.

These goals or dreams could be in sport, music, entrepreneurship, writing and whatever anyone can do to make their dreams of having a fulfilled life come to fruition.

The world is repleted with men and women who have made their dreams become reality.

Whether you have had a goal that have become reality or not, the most important thing is to have them, as they would give your life focus and direction. And this will spur you up each day you wake up from bed you know you have to go out and try to make something happen.

It’s definitely suicidal not to have any dream, like a rudderless ship sooner or later you will hit the rock. Dreams give purpose to life, many people without purpose have struggled for years or decades trying to find the meaning of life and are living an uninspiring lives.

Ask yourself, how am I going to live and create the tomorrow I have committed to? Know that when you set out to live your dream the universe will create obstacles on your path to test your resolve.

That’s why Anthony Robbins says ” I believe life is constantly testing us for our level of commitments and life’s greatest rewards are reserved for those who demonstrate a never ending commitment to act until they achieve. This level of resolve can move mountains, but it must be constant and consistent. As slimplistic as this may sound, it is still the common denominator separating those who live their dreams from those who live in regrets”

Necessity is the Mother of Invention

I am now going to explore some anecdotes of individuals who have made their dream becomes reality.

The very fact that others have achieved greater feats means you can do so also.

Strive Masiyiwa is the founder and CEO of the Econet group, a mobile service provider in many countries of Africa and the Middle East.

In 1998 the Botswana government called for tenders from experienced mobile operators to bid for the country’s first ever mobile licence. Dr. Masiyiwa’s company submitted  their proposals even though they had not operated a mobile network before.

He only had a vision that one day he was going to have accompany that would provide mobile telephone service. Despite having not run a mobile service company before he was not deterred as he went about looking for partners and stakeholders which is one of the condition to qualify for the pre- bidding process.

Almost everyone and companies he contacted said they were already involved with some of the other big-name bidders. However, by a stroke of luck a European company agreed to partner with him with the condition that they would not commit any fund to the project. Dr. Strive was okay with that as he just wanted to gain credibility with the presence of a foreign partner on his team.

Having scaled one hurdle another reared its head. Part of the requirements for the bidding firms was for them to have local citizens as shareholders in their companies. To this he turned to the manager of the local hotel he was staying. He made the young manager and some of his friends shareholders of Mascom wireless.  His preffered name then as Econet was embroiled in a fierce legal tussle with the Zimbabwean government.

During the bidding process Mascom wireless came up against some major experienced International operators like vodacom, MTN, Bharti Airtel, Orange and many more.

In total 21 companies submitted bids for the mobile licence. At the end of the first round of the bidding process five companies were selected to go for the final stage, guess who was among the five, Mascom wireless off course.

They upstage 17 others and at the end of the final round, two companies won the licence to operate Boswana’s first ever mobile network and Dr. Strive’s Mascom wireless was one of them.

From that humble beginning, he has gone ahead to build many more mobile networks across Africa and parts of the world, thereby making his dream becomes reality.

Stop to imagine what would have happened if he had not taken the gauntlet or if he had allowed fear and inferiority complex to stop him in his stride. Maybe he would have still be in Zimbabwe as a small player selling recharge cards. He was confident and knew that if he takes the risk he just might succeed, and success he achieved.

The next story I’m going to share is that of 20 time tennis Grand Slam winner Rafael Nadal. His career have been marred by injuries, but through it all he kept coming back to tour after each injury.

His career was hindered by knee tendinitis in 2012, a fate he also suffered in 2009. Tennis pundits all over the world wrote him off because he kept going from one injury to another and had to be sidelined from many competitions.

For example, he was unable to defend the Wimbledon title he wrest out from rival Roger Federer’s grip in 2008.  And he pulled out of the Olympic in 2012, confirming  the fears of tennis enthusiasts about his career being over. But his passion and love for the game of tennis would not allow him quit. Note that at this point he was a 14th Grand Slam winner.

However, after his return to tennis in 2013 he shocked the world by winning an unprecedented 9 ATP titles as well as three grand slams. Again at the beginning of 2014 he had serial injuries which include wrist and back injuries and to cap it all appendicitis.

Many lesser beings without fire in their dreams would have said enough is enough let me go back home to Mallorca and try to become a tennis coach. Off course, not Nadal, he kept ploughing on winning and losing some in the midst of many minor and major injuries.

Today, through dints of hardwork, consistency, self confidence, and a strong mental attitude, he has garnered 20 slams and many more ATP titles.

The third story I am going to share is that of Jan Koum, Co-founder of WhatsApp. Koum was a Ukrainian immigrants to the United States. He was 16 when he and his mother reached the United States. Short on cash, the two stayed in a modest 2 bedroom apartment on government assistance. His father died during the process of migration and never got to the States.

Read: What would you do if you knew you could not fail

His mother would later find work as a baby sitter, while Koum swept the floors of a grocery store. When his mother was diagnosed of Cancel, and could not work again, they survived by earning disability payment from the Government until her death in 2000.

With no family and nobody to turn to, he took the bull by the horns and began catering for himself. Koum taught himself computer networking using a manual he bought at a used books store when he was able to lay his hands on a computer at age 19.

Subsequently, he worked for 9 years as a security tester analysing Yahoo advertising systems. Nevertheless, he soon got disillusioned doing this job and knew he wanted a change badly to maintain his sanity. Out of job, he and his best friend Brian Acton applied for jobs at Facebook, Twitter and other startups. They were rejected in all of these companies. This and other frustration from the no phone calls policy of his gym forced him to start the micro sms sites WhatsApp with his friend Brian.

However, after a few years of struggles and after being kicked out out by Evernote from the shared office block, WhatsApp weathered the storm and in the beginning of 2010, the company stated making a positive cash flow of $5000 monthly.

Not bad for a poor immigrant orphan.

To make your dream becomes reality you need commitment, perseverance, skills, and by having smarter ideas.

Please endeavor to leave your opinions and comments below.