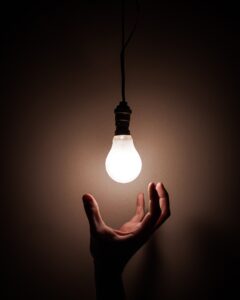 Don’t you wish you have a magic wand to help you develop smarter ideas to run the affairs of your life, acquire wealth, live a fulfilled life and always believe in yourself as well as have unwavering confidence?

I don’t think such magic wand that will help you come up with smarter ideas exist anywhere on earth though. You have to grind, and work hard putting in the time to achieve success at any endeavour. You must be deliberate about your life and go the extra mile to make your life a masterpiece.

Get My Amazing Book ” You Can Be Extraordinary, But Will You? Available on Amazon

What is then the singular factor that determines who get successful and who does not? I know many people would say hard work, but it isn’t. It is smart work, and even when you are working smart you need to still go the extra mile by having smarter ideas to outwit the competition. The competition here may not be a rival company or a colleague at work. It may be your own level of efficiency and effectiveness and how you deliver your task.

The Importance of Having Smarter Ideas in Life

Therefore, you need the grit of a bulldog when working toward achieving a specific goal.
Ideas are dime a dozen, execution is key like the say. However, having an idea is also necessary, because this could also mean no idea no execution.
Nevertheless, a lot of seemingly hard-working and motivated people with passion for what they do and even purposeful still struggles to find success in life, failing for years until they figure it out by learning to develop smarter ideas and finding a better way to execute them.
To buttress my points, I am now going to tell a few stories about how having a better idea and a good strategy can lead you out of failure and turn you towards success.

Odeo was the company that birthed Twitter. It was going to be a pod casting platform but wrong timing made it coincided with Apple launched of iTunes podcasting. This instantly made Odeo’s platform irrelevant, by this time venture capitalist and angel investors had sunk money into it. This made the startup faced imminent collapse as investors were agitated about their investment. At this time Jack Dorsey, current CEO of Twitter, and an early employee of Odeo had already started working privately on another idea which would later help the failing Odeo’s pivot.
A member of the Odeo team and CEO, Evans Williams who had earlier sold his company, Blogger to Google decided to buy back the investors stock so they can recoup their investments. Williams later told employees that Odeo’s future was not in podcasting and told them to start coming up with smarter ideas for a new direction Odeo could go. Employees would break into groups once a week trying to come up with ideas, eventually Jack’s idea was the Goose that lays the golden egg for Odeo that gave birth to Twitter in 2006. If you read the story you could see how a good idea can change the direction of ones life and enhances their capacity as well as expose you to opportunities.

Read: Finally Inner Peace is Possible in your Heart

Jide was a mechanical engineering graduate, who was working in a construction company in Lagos, Nigeria. He would wake up by 4:30 am everyday including Sundays to get to work by 7:00 am at the Island. He was always angered and dissatisfied with the conditions at work and he knew he wasn’t going to survive the harsh realities of things in the work place for long. He was not even being paid a living wage to show for the many hours of work he put into the job daily. According to him, the job was not even a permanent one. There had been rumors from the company’s grapevine of an impending retrenchment since the road project his company was working on was gradually winding down. Jide was worried because it took him a leg to get this job, and he knew that if the impending retrenchment affected him, it would take him another length of time to secure a new one in the bogus unemployment market. He started thinking of what to do to ameliorate his situation. He started looking for a problem to solve that would also give him an opportunity to control his destiny. He looked at different business ideas but none appealed to his being. Until one day, he came back from work. Although tired, he decided to see what was on the television. A documentary about the perennial causes of flooding in Lagos was being aired. The indiscriminate disposal of sachet water which itself is a source of livelihood for many Nigerians, was identified as one of the causes of blocked drains which leads to flooding.

Read: The Only way out is through… Surrender + Optimism

Something lighted up within him and he couldn’t sleep that night, because an idea has dropped in the core of his being and was looking for an expression. Going to work the next day, he knew things would never be the same again. He started implementing the idea despite the huge cost of equipment and machinery required for the take off of the factory.

He came up with an idea to recycle the sachets water waste, this way it would help to eliminate waste and the indiscriminate dumping of the sachet water waste in drains which lead to blockages.

Where there is a WILL a WAY will be found.

Despite initial sets back with funding, he was able to commence the recycling of the sachet bags. Today, his recycling facility located in Lagos Nigeria, is a source of livelihood to those he buys the sachet bags from. I told someone this story, instead of the individual to see the great opportunity in the story and respect the ingenuity and entrepreneurial prowess of Jide, he said ‘’ but there is still flooding and the sachet paper still litters the streets’’. Here, lies the opportunity; Jide is just one man trying to solve the problem of a city of 23 million people.

He’s inundated with demands from other African countries for the pelletized granules, the end product of the recycled sachet, which is an important raw material for plastic manufacturing and other uses.

Having smarter ideas can turn virtually anyone from a pauper into a man of means and can change poorer countries into developed ones.

The Daily Practice can make you an idea machine and Develop Smarter Ideas.

In his book ‘’choose yourself’’ blogger and author James Altucher talked about the ‘daily practice’ which he says can help anybody stay balanced and aligned.
This practice involves four aspects, which anybody can use to improve their lives and become an idea machines. This is the daily practice in a nutshell

Physical
This involves doing physical exercises everyday for 20 to 30 minutes. This could include taking a walk, doing yoga and anything that helps you sweat. Apart from keeping you in shape it can help your mind better in handling anxieties.
Eating right, avoiding alcohol and sleeping for at least 8 hours daily is needed to help your brain have some rest.

This involves spending time with people you love and staying away from people that brings you down and sap your energy. It also means, avoiding negative people and spending the most of your time with people that are positive.
Another angle to this is that you should practice honesty every time. Practicing honesty makes you feel good about yourself and increases your self esteem as a person.

Every day, ensure that you write 10 ideas to build your idea muscles. Come up with 10 ideas for a business venture, and come up with 10 ideas to improve your business, your relationships with people, and making your community better as well as 10 ideas that will improve the world. Write ideas on how to bring happiness into your life and the lives of everyone around you. Also have ideas about the steps to take to implement these ideas. Doing this every day, will make you an idea machine, and you will have no problem achieving your dreams.

Pray every day, do meditation if you will, and contemplate. These practices will sharpen your inner guidance. Sit in silence for an hour and just be grateful to God, for the gift of life, abundance, good health, wonderful spouse, and for everything.
As you sit in silence forgive yourself and all those that wronged you, let the feeling of hate flow like a river away from your being, be grateful for the people that wronged you, fill your heart with love and happiness for them.
Read a spiritual text, it could be the Bible, an inspirational book or just any good literature.

If you can endeavor to do the daily practices every day, miracles will happen in your life, you will have good health, smarter ideas and synchronicity everywhere you go. You will have no problem in putting your attention in the moment.

I like to hear your views and opinions in the comments below.

Dear friends, it took me at least 16 hours to write this post. It would only take you 20 secs to share this on social media using the social buttons below. Thank you.